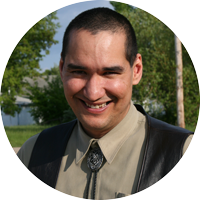 Thomas grew up with a lot of alcohol and violence.  He reasoned that jail was a way for him to escape home and so he ended up in the Manitoba Youth Center.  Because he was a good fighter one of the workers they encouraged him to take up boxing.  It became a way to vent his anger, and he became very good at it.  He eventually became a gang enforcer where violence was his trade.  But somewhere along the way, God began to get his attention.  Finally, reeling from one the darkest nights of his life, as he was cleaning up the blood in his clubhouse, Thomas decided to follow Jesus Christ… and he’s never been the same.  Now he shares with gang members, and whoever else will listen, the new life that he’s found in Christ.  His message is powerful because he’s living proof that Jesus saves!