“Why you always smiling?” The Testimony of Julius Twohearts (Sisseton Wahpeton Sioux) 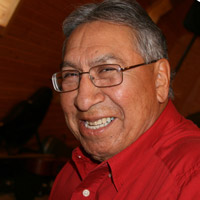 Julius grew up on the Spirit Lake reservation in northeastern North Dakota. From his youth, his life was a toxic mixture of anger and alcohol which would take him places he would later regret.  He eventually went to prison for attacking a police officer. Years later, while Julius was drinking under a bridge, a stranger came and told him about Jesus.  That began a journey that would eventually change everything. Today, Julius is known for his smile. As you listen to him share, you’ll actually hear him smiling. Find out why… maybe you’ll smile too.

4 comments on ““Why you always smiling?” The Testimony of Julius Twohearts (Sisseton Wahpeton Sioux)”